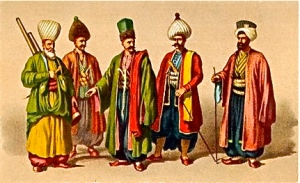 It began as a tiny Turkish state, expanding into the largest and longest lasting empire in history, spanning 3 continents encompassing the Caucasus and Northern Africa, most of Western Asia, Eastern and Southeastern Europe, and the Balkans. 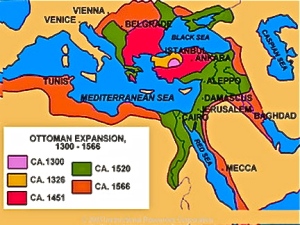 The empire was at the center of interactions between the Eastern & Western worlds for 7 centuries.

2.  Harems were central to Ottoman lifestyle.

Contrary to Western interpretation of the word, ‘harem’ is actually a term of respect. It means ‘sacred,’ and defines the inner sanctum of a household or establishment. 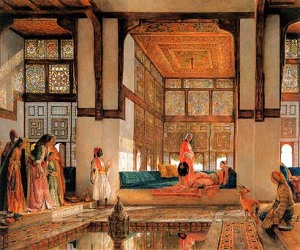 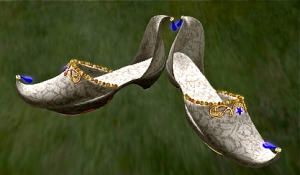 This signaled a need for privacy or the presence of other female visitors within the haremlik. Upon seeing the slippers, a husband would retreat back to the selamlik until they were removed.

…can someone please tell me WHY women worldwide are not using this brilliant ‘Do Not Disturb’ technology? 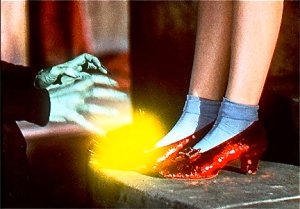 4.  In the beginning of the 20th century, the Western world – intrigued by Ottoman separation of the sexes – began to create separate areas in travel stations for women. Ladies’ waiting rooms were constructed in train stations, and railway trains designated women-only compartments, as did steamers and tramcars. 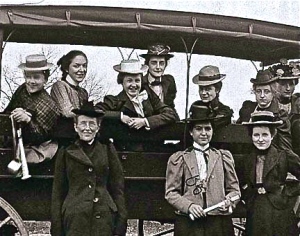 5.  The haremlik, though sacred and protected, was also the most social area of the home. Visitors were always welcome to drop by – provided they had the proper anatomy.

Female friends and relatives, entertainers such as musicians, singers, actors, poets, etc. could always be found livening up the haremlik. Women of every status, from wealthy to slave…of every race…of every religion, from Christian to Jewish to Buddist…every woman was a welcome visitor to the haremlik. 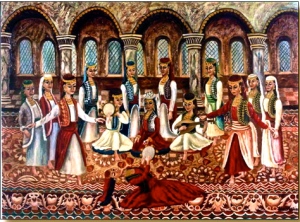 Except when male relatives were present.

Though all were welcome as visitors to the haremlik, class distinctions were observed. Author Emine Foat Tugay, in his book “Three Centuries: Family Chronicles of Turkey and Egypt,” details these distinctions:

“Whatever their status, everyone was well received according to the old Ottoman tradition…a truly democratic system in the only genuine meaning of the word since persons of every class had access to and were made welcome by the highest in the land.

Good manners among all classes were the rule. A woman of inferior rank would never presume to sit close to the mistress of the house, but when asked to be seated, would of her own accord choose a chair placed at some distance from her hostess.

Women of humbler condition sat near the door on stiff cushions placed on the floor for that purpose...” 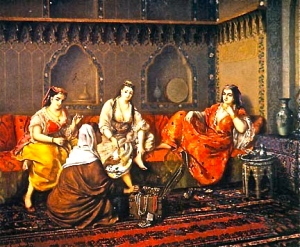 Wow, check that out. Our democracy is just like that of the Ottomans!

Only instead of smiling hostess offering “stiff“cushions on the floor for the lower classes, we have smiling billionaire politicians offering to cut unemployment benefits after we’re pink-slipped.

Which medieval fact could you live with?

Which could you live without?

(If I don’t respond to your comments right away, it’s because I’m out shopping for slippers to place in my doorway!)

Meet the women inside a royal harem!

12 thoughts on “5 Medieval Facts of Ottomans: The Harem Home”