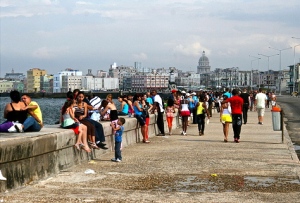 Our next stop was along the Malecón, an impossibly long, low cement wall separating the Gulf of Mex from a broad Havana boulevard.

The ocean was incredible! Shades of aquamarine and turquoise to rival any ocean I’ve seen.

People walking up and down the Malecón boulevard. People walking atop the wide seawall, stepping around those sitting or laying. People in bathing suits or snorkel gear climbing over the wall, carrying fishing poles or nets. People leaning, eating, kissing, reading, napping, dancing, talking, daydreaming over the rolling azure Gulf…all atop the expansive Malecón seawall.

I wanted to jump out of the bus window, and join that wall activity!

Thankfully, the bus stopped and we were let out to experience the Malecón for ourselves.

Cuban music greeted us, different songs at once from an old portable radio to the left, a harmonizing group of street singers to the right. The music was infectious; I couldn’t help rolling my hips a little bit to the rhythms. ¡Adoro la música Cubana! (I adore Cuban music!)

At the wall, I hopped up and sat facing the ocean. The salty, wet spray felt heavenly and coated me with cool defense against the heat of the day.  Overhead, the whitest, fluffiest clouds I’ve ever seen hung motionless in an ultramarine sky. Below, rollicking whitecaps crashed against moss-covered boulders below my dangling legs. 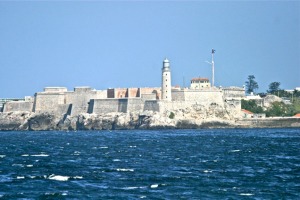 Looking out over the great blue Gulf, I saw miles of emerald forest interspersed with bright red roofs on gray stone buildings. To the east, a peninsula offered a fort and light tower. Armando told us this ancient stone structure was named el Morro, and had been built as a lookout for marauding pirates, and other unwelcome visitors to the island centuries ago.

As the group leaders herded us across the vast boulevard, we discovered that crossing the street in Cuba is an adventure in itself.

Cuban drivers seem to hate it when you make a dash for your life across their road, and I would swear they floored the gas for wrathful games of Kill-the-Pedestrian.

You can’t believe how unnerving it is to have a lawless boulevard full of gigantor oldie-mobiles bearing down on you!

I’m pretty sure this is where Steven King got the idea for Christine. 😯

Everyone in our group had their own method for getting to the other side. Some grabbed the hand of another, and tip-toed in halting or speedy mini-dashes. Others stood rooted to the curb, eyes wide, heads swiveling, pursed lips parting only to complain indignantly about how dangerous this was.

Karli, Dana and I dodged and yelped our way across, giggling relief each time we narrowly avoided swallowing bumper.

“Those girls are crazy!” frowned those in our group who refused to cross. “Look at them. They’re laughing. They think this is funny!”

Of course that only made us laugh harder.

Armando joined us, glanced back at the fearful group members still on the curb, and attempted valiantly not to break out cackling with us. He failed. The four of us went into  belly-laugh meltdown right there in the middle of the deadly boulevard.

Still laugh-gasping, Armando pulled himself together and managed to guide us safely to the other side, after which Karli, Dana & I sang out our victory to the tune of ‘Guantanamera:’

Our singing attracted a street musician, who began strumming ‘Guantanamera’ on his guitar and singing for us. It was so unexpected and perfect.

The musician was really good, and we salsa-ed with each other as he sang, thanking him with dollars at the song’s end.

The group leaders gathered us all together, and explained that we were in ‘el mercado’ (the marketplace). All around us stretched parks, open-air restaurants, beautiful old works of architecture.

Booksellers occupied entire sections of the mercado, hawking old leather-bound volumes of both dilapidated & well-preserved books (but none at all new), posters, aged Cuban comic books, folders of pesos (dollars) and moneida (coins) with Che’s image on them, and lots more literary stuff.

There were larger-than-life statues of Martí and Maceo mounted on pedestals with Cuban flags flying above them. There were amazing trees with twisted, cavernous trunks and weeping, wispy branches that hung down to the ground.

And there were dogs.

Dozens and dozens of dogs.

Heads hung, ducked in the browbeaten manner of the routinely abused or neglected. Shuffling aimlessly, listlessly.

My heart was breaking even before I saw the first pregnant one.

Belly sagging round and low, nipples pointing groundward, ribs jutting thru thin, dehydrated skin. I could count each one of her individual rib cage bones.

She, like the rest I would see throughout the day, was a shuffling corpse.

I will never forget their eyes.

Dana and the others seemed oblivious. But Karli and I exchanged a look, and I saw the horror in her eyes. It mirrored my own.

We are animal people.

We looked away from each other because we both knew tears would fall if we didn’t.

We also knew, by the way everyone around seemed not to notice the dogs, that it was not something we could openly react to.

Even so, I stole a glance at Armando and was taken aback to see that he had been watching us. His expression was…I can only describe it as controlled disgust.

He was pissed at our reaction to the dogs… 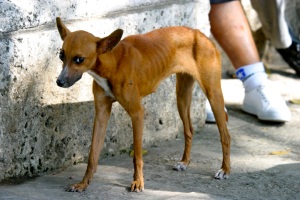 “Diary of An American Girl’s Journeys to the Forbidden Land.”