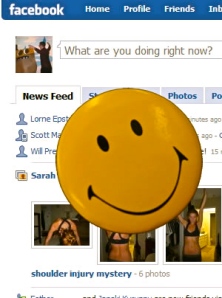 Is everyone else happier than you?

According to Slate, it is.

Misery has more company than people think, says Dr. Alex Jordan, social psychologist and co-author of a research study on the subject of moods. “If we only wanted to be happy it would be easy; but we want to be happier than other people, which is almost always difficult, since we think them happier than they are.” Jordan contends.

And social networking may be making this tendency worse. Especially Facebook.

Says Jordan, about Facebook: “We are playing with a new puppy. We are smiling in pictures (or, if we are moody, we are artfully moody.) Blandness will not do. And no one will “Like” your update that the new puppy died, but they may “Like” your report that the little guy was brave up until the end.”

Bet you never thought you’d be so happy to hear that everyone else isn’t! 🙂

What do you think about FB happy-ness?

Do you agree with this article?